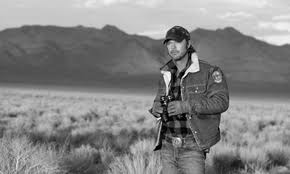 Australian director Ivan Sen first came to prominence with his 2002 road movie about two Indigenous teenage runaways, Beneath Clouds. A contemplative, episodic drama, there are distinct echoes of that film’s style in Sen’s new feature, the moody tone poem, Dreamland.

A low budget black and white feature filmed in the US state of Nevada, Dreamland stars Daniel Roberts (Underbelly: The Golden Mile) as Dan Freeman, an obsessive UFO hunter roaming the desert around the legendary Area 51, a top secret US military base rumoured to house the remains of an alien spacecraft that crashed near Roswell, New Mexico in 1947. Nicknamed ‘Dreamland’, the base’s official purpose is the development and testing of experimental aircraft and weapons systems.

Dwarfed by the rugged mountains, driving endless down the so-called ‘Extra Terrestrial Highway’, Dan seems almost hypnotised by his quest for the truth about alien life. Not even the unexpected appearance of his wife April (Tasma Walton, City Homicide) can drag him away from the desert back to his former life – but such is the nature of the film that even April may be an illusion; the embodiment of Dan’s dreams or a riddle from his past.

For Dan’s dreams have a very solid presence in the film, in the form of footage of astronauts and space missions intercut into the modern-day footage alongside quotes from Giordano Bruno (an early astronomer executed by the Spanish Inquisition in 1600 after proposing that our sun was just another star) and former US President Harry Truman.

Written, directed, shot and edited by Sen, Dreamland is nothing like the standard dramatic features with their three act story arcs that screen at your local multiplex. Virtually silent save for fragments of radio broadcasts, ambient noise and Sen’s evocative steel guitar and cello-based score, it is more a contemplative work of video art than a traditional film; as much a meditation on humanity’s place in the world as it is about Freeman’s quest for the truth.

Some audiences will no doubt find Dreamland to be a frustrating, vague exercise in self-indulgence. I found it an enthralling, almost hallucinatory experience, with its breathtaking time-lapse landscape photography reminiscent at times of Godfrey Reggio’s Koyaanisqatsi, and Daniel Roberts’ intensely focussed performance ripe with possibility. My only real complaint is that I felt the running time could have been trimmed back by 10 - 15 minutes without impacting on the film overall, but that's a small qualm in light of what is otherwise a bold and beautiful film that gently but firmly rejects commercial movie-making orthodoxies.

Rating: four stars
Posted by richardwatts at 9:28 am

This was my top film of the fest (as well as being my first). It really touched me. Loved it.